Professor Spencer De Li, chairman of the AASAR, and his Ph.D. student published a paper examining the relationship between Religion and Health in Macau 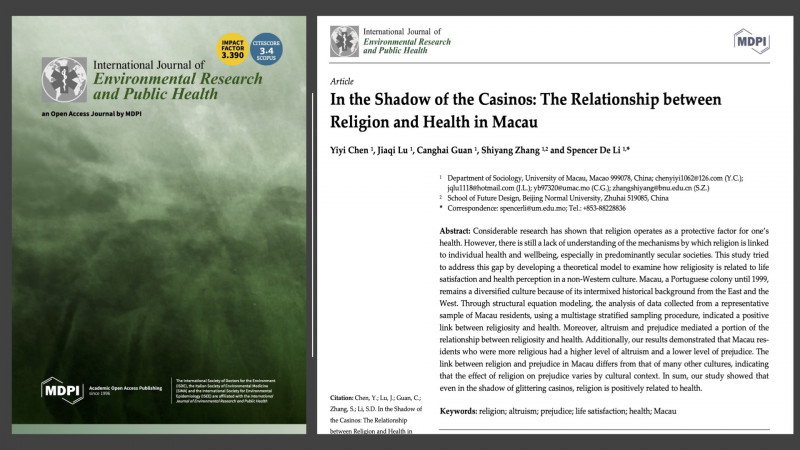 Title：In the shadow of the casinos: The Relationship between Religion and Health in Macau

Abstract: Considerable research has shown that religion operates as a protective factor for one’s health. However, there is still a lack of understanding of the mechanisms by which religion is linked to individual health and wellbeing, especially in predominantly secular societies. This study tried to address this gap by developing a theoretical model to examine how religiosity is related to life satisfaction and health perception in a non-Western culture. Macau, a Portuguese colony until 1999, remains a diversified culture because of its intermixed historical background from the East and the West. Through structural equation modeling, the analysis of data collected from a representative sample of Macau residents, using a multistage stratified sampling procedure, indicated a positive link between religiosity and health. Moreover, altruism and prejudice mediated a portion of the relationship between religiosity and health. Additionally, our results demonstrated that Macau res- idents who were more religious had a higher level of altruism and a lower level of prejudice. The link between religion and prejudice in Macau differs from that of many other cultures, indicating that the effect of religion on prejudice varies by cultural context. In sum, our study showed that even in the shadow of glittering casinos, religion is positively related to health.