Professor Spencer De Li, Chairman of the AASAR, and his Ph.D. students published a paper examining the patterns and correlates of adolescent substance use in Macau 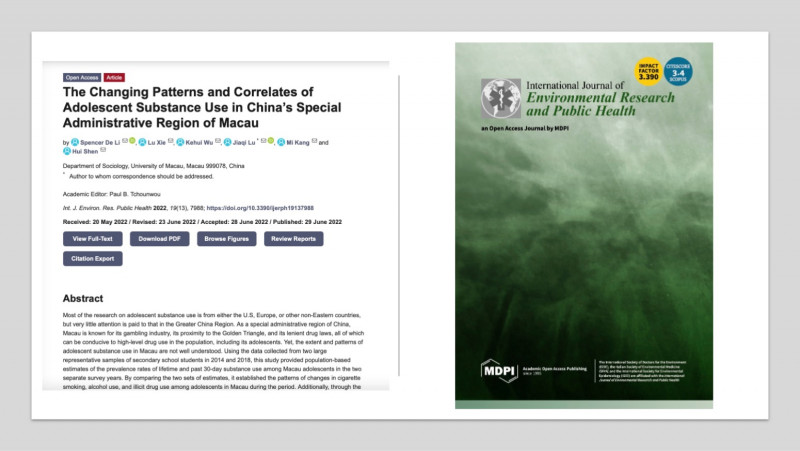 Title: The Changing Patterns and Correlates of Adolescent Substance Use in China’s Special Administrative Region of Macau

Abstract: Most of the research on adolescent substance use is from either the U.S, Europe, or other non-Eastern countries, but very little attention is paid to that in the Greater China Region. As a special administrative region of China, Macau is known for its gambling industry, its proximity to the Golden Triangle, and its lenient drug laws, all of which can be conducive to high-level drug use in the population, including its adolescents. Yet, the extent and patterns of adolescent substance use in Macau are not well understood. Using the data collected from two large representative samples of secondary school students in 2014 and 2018, this study provided population-based estimates of the prevalence rates of lifetime and past 30-day substance use among Macau adolescents in the two separate survey years. By comparing the two sets of estimates, it established the patterns of changes in cigarette smoking, alcohol use, and illicit drug use among adolescents in Macau during the period. Additionally, through the analysis of the data in the latest year, it identified risk factors for adolescent substance use in the special administrative region. Among the key results, the rates of cigarette smoking and illicit drug use were low to moderate while the rates of alcohol use were relatively high; cigarette smoking decreased during the period, but alcohol use and illicit drug use remained stable; Macau adolescents shared similar risk factors for substance use with adolescents elsewhere, but unique circumstances might exist to influence their alcohol consumption.
Keywords: cigarette; alcohol; illicit drug; adolescent; substance use; Macau
Full text link：https://www.mdpi.com/1660-4601/19/13/7988