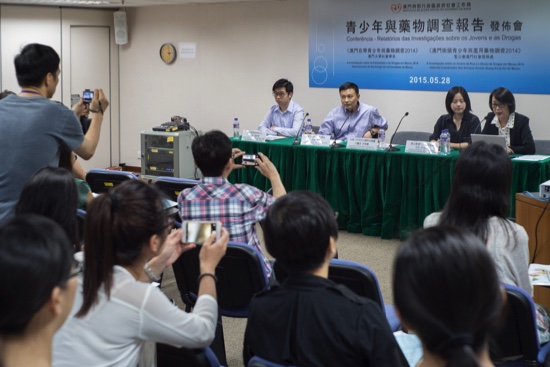 Professor Li, had published the reports of “Tracking Study of Drug and Students in Macau” during the press conference organized by Social Welfare Bureau (IAS) of Macau in May 28th. Along with professor Li, some experts and officers from Sheng Kung Hui Social Services Coordination Office and IAS’ department for the prevention and treatment of drug abuse had also attended the conference to share their findings and comments.

Applied multi-stage sampling scheme, the study collected a total of 9837 questionnaires from students of primary school, middle school and college. Researchers asked their attitude towards substance (abuse), exposure to substance and suggestion to IAS, etc.

According to the report: 2.48 percent out of the sample claimed that they have taken drugs, which had increased comparing with 2010. Students at all grades tended to dis-approve substance abuse behaviors and hold cautious attitude towards varieties kinds of drugs. Moreover, the proportion of students had experience of substance abuse arisen to approximately 3% (total 232 students).

Comparing to 2010, a higher rate of students accepted smoking and drinking behavior: 57% students consumed alcohol, indicating decreased probability comparing to 2010. Most students received anti-substance-abuse education beyond school, some received such information from out-side school activities, community services and public advertisements. Furthermore, seminars provided beyond school were reported to be the most effective.